I have recently installed a Thinkware F770 front and rear dash cam kit, together with Cellink B rechargeable battery pack.

In recent years dash cams have gained massive popularity for their importance in providing video evidence of traffic accidents, and they can also capture and share your adventures on the road.

There are currently 15 dash cams in the Thinkware range. The F770 sits near the top of the range.

A flat mounting plate is secured to the windscreen by a self adhesive pad and the front camera then clips onto this plate. This mounting method is discreet and secure. The tape mount also eliminates video vibration and reflections by minimizing the distance between the camera and the windscreen. 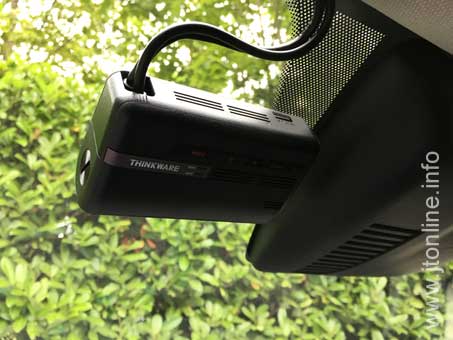 The rear camera is a small cylindrical one piece system built into the mount, which is attached to the rear window by a self adhesive pad.

The Thinkware F770 does not come with an inbuilt screen, instead it connects via its own Wi-Fi hotspot to a free iOS or Android smartphone app that enables you to view live video, or view and download recorded video footage as well as change camera configuration settings.

Thinkware also has free computer software that you can download and use to watch recorded footage, track vehicle location on a Google map, view speed information, view a G-Sensor graph and listen to recorded sound. The camera’s inbuilt microphone and speed stamp can both be switched off in the camera configuration settings.

The continuous recorded video is split into one minute long files on the Micro SD Card with auto-loop recording so you don’t run out of space. If the G-Sensor is activated during driving, 10 secs before and after the event are saved to a special folder on the SD card and 6 seconds of video is simultaneously saved to the Nand Flash internal backup memory in case of subsequent damage to the SD card.

If the camera is hardwired to the vehicle fuse box, parking mode is automatically enabled when the ignition is switched off. This mode can continue for a maximum of 48hrs or until a minimum vehicle battery voltage threshold is reached. Parking mode does not work if using the cigarette light adaptor lead. In parking mode you can set the cameras to record in time lapse, which records at 1 frame per second, reducing the size of the video file. This allows video recordings in parking mode to continue up to 16 times longer than many other dash cams. If the dash cam detects impact whilst parked, it will store 3 minutes of video before and after the event.

If you set the parking mode to motion detection instead, the cameras will record at normal frame rate for 10 seconds before and after motion is detected.

Once parked recording has ended, the dash camera voice will tell you how many motion events and G-Sensor events have been recorded.

The F770 uses a super capacitor based internal power supply to safely shut down the camera after losing external power. This ensures reliable performance in extreme temperatures, unlike dash cams that use Li-Ion or alkaline internal batteries. It also has a built in thermal sensor that turns off the dash cam if the ambient temperature reaches around 75°C.

Other features of the Thinkware F770 are Lane Departure Warning System (LDWS), Front Collision Warning System (FCWS), and Safety Camera Warning System with spoken alerts. I have turned off these additional features as my CX-3 already has better systems built-in.

I decided to hardwire my dash cam via a Cellink B v2.1 battery pack that I fixed under the passenger seat. 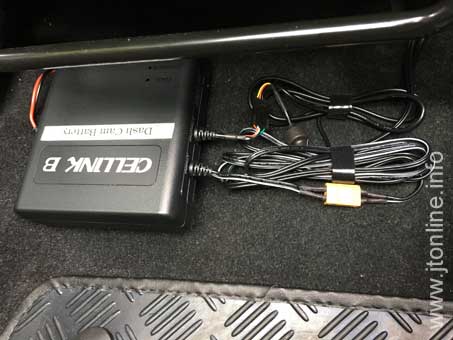 The first thing I did was to download the smartphone app and then attach the mount to the F770 and plug it into the car’s accessory power socket. Then I pressed the wifi button on the F770 and linked it to my ‘phone. I used the live view on the ‘phone app to align the camera on the windscreen, ensuring the image was level and the lens was just inside the wiper swept area.

I mounted the camera at the top of the windscreen to the left of the rear view mirror. To mount it behind the mirror or on the driver’s side would have meant it would have contravened the UK Road Traffic Act 1988 regulations. The regulations state that a camera must not intrude more than 4cm into the wiper swept area, or more than 1cm into the primary zone. The primary zone is a 29cm wide band centred on the steering column and bounded top and bottom by the wiper swept area of the windscreen.

Having removed the rubber seal around the passenger door frame, I pulled the A pillar trim off. As well as a couple of clips, the trim is tethered to the car body at the top so that it doesn’t fly across the car in the event that the air bag is deployed. You can either cut the tether and order a replacement from a Mazda dealer, or carefully prise the clip out of the bodywork, or do as I did and work with the trim still attached. I used cable ties to fix the two camera leads to the existing car wiring loom, so that they remained above the airbag, and fed the leads down behind the dash until they appeared in the passenger footwell.

I removed the black plastic trim from the front and rear door sills and routed the rear camera lead to the rear of the car, then up behind the roof lining to the rubber tube that takes the car’s wiring loom into the tailgate. Next, I unclipped and removed the black plastic panel on the inside of the tailgate. Feeding the camera lead down the rubber tube into the tailgate was very tricky and took quite some time to do. I knotted a length of bailer twine to the end of the lead and the other end to a length of thin garden wire and then pulled it through using a bit of washing up liquid as a lubricant!

The next thing I did was mount the Cellink B battery pack to the floor carpet under the passenger seat, using the hook side of the hook & loop tape provided (see photo above). I used a small block of packing foam as a spacer at one end of the battery because the carpet isn’t flat under the seat. I took the input and output cables under the carpet following the existing wiring loom for the heated seat etc., and then along the door sill to the fuse box area in the passenger footwell. 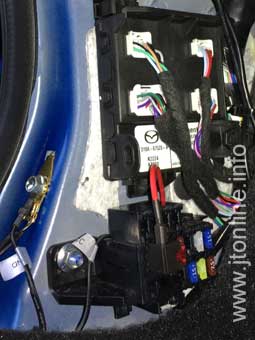 I soldered the three wires of the Cellink output cable to the three wires of the camera cable, matching the BATT, ACC and GND labels on both cables and covered the soldered joints with 1.5mm diameter heatshrink tubing. The Cellink takes its power from an ignition controlled live together with a ground connection so there’s no possibility of the camera discharging the vehicle battery. I connected the ground wire to the existing ground screw on the door frame and removed the trim from around the fuse box and tapped into the live from 15A fuse 5 (F.OUTLET) in the passenger footwell fuse box.

The CX-3 uses low profile mini fuses and I couldn’t find the correct fuse tap in any of the local car accessory stores. The pins of a mini fuse holder are spaced the same but are longer and don’t fit as tightly into the fusebox. The salesman in Halfords said they have to use mini fuse taps when they fit accessories because they don’t have the low profile sort and he agreed with me that it’s not an ideal solution. 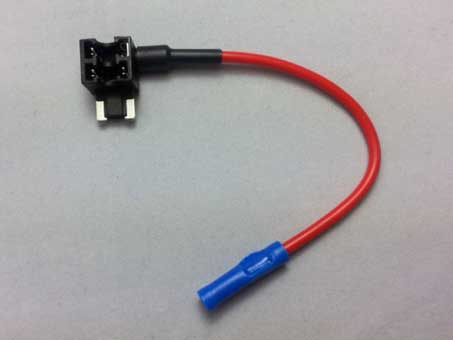 Then I put back the A pillar trim, the trim around the fuse box, the door sill trims, and door frame seals. I plugged both cameras in and connected up to my ‘phone once more to get a live view from the rear camera so that I could mount it correctly. Note that when the rear camera is the correct way around, the writing on the body of the camera is upside down. You can’t flip the image in the camera settings later so it’s important to get it correct before you stick the camera mount to the rear window. I stuck it centrally at the top of the rear window glass and then refitted the black plastic trim panel on the inside of the tailgate.

Once everything was installed it was just a case of going through the settings in the app to set up the camera and recording settings as required.

Have your say... Cancel reply